Over the past 20 years, overall survival rates for all stages of prostate cancer combined have increased from 67% to 89%. Some of the possible reasons for the increase in survival rates include public education, new techniques of early detection, and aggressive therapy. The major treatment options for prostate cancer include surgery, radiation, medical therapy and watchful waiting. A patient's treatment options will depend upon his age, the stage of the disease, and the advice of a physician.

The immune system is made up of immune cells that circulate the body in the blood; these cells are our body's natural defense system against most diseases, including prostate cancer. Immunotherapy is a treatment that encourages the body's own immune system to fight cancer. One such treatment is Sipuleucel-T, an FDA approved cancer vaccine. Unlike traditional vaccines, which promote the development of immunity by imitating an infection, this vaccine transforms the patient's own cells to specifically recognize and attack prostate cancer cells. This process involves filtering out the white blood cells from a blood sample, stimulating them to fight prostate cancer in a lab, and then giving those cells back to the patient via an IV infusion. This process is repeated every two weeks for three treatments. The goal is to stimulate the patient's immune system to fight the cancer cells.

Immunotherapy does not lower PSA, treat symptoms, or delay disease progression. However, this treatment has been shown to prolong life. This treatment is often for individuals with prostate cancer that has spread outside of the prostate and is resistant to standard hormone treatment.

The side effects of sipuleucel-T are usually limited to the few days following an infusion of the stimulated cells. Patients may sometimes experience flu-like symptoms with fever, chills, nausea, and bone and muscle aches. These symptoms generally resolve within three days and can be treated with acetaminophen. 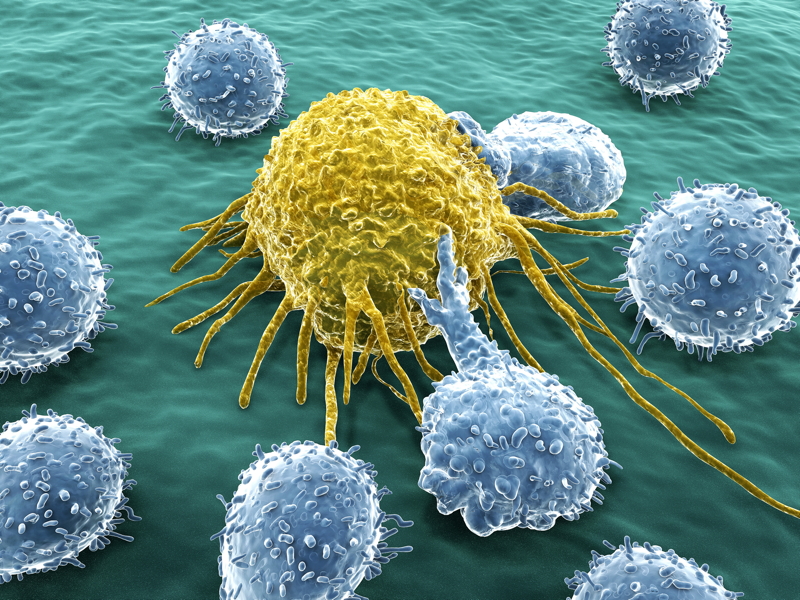 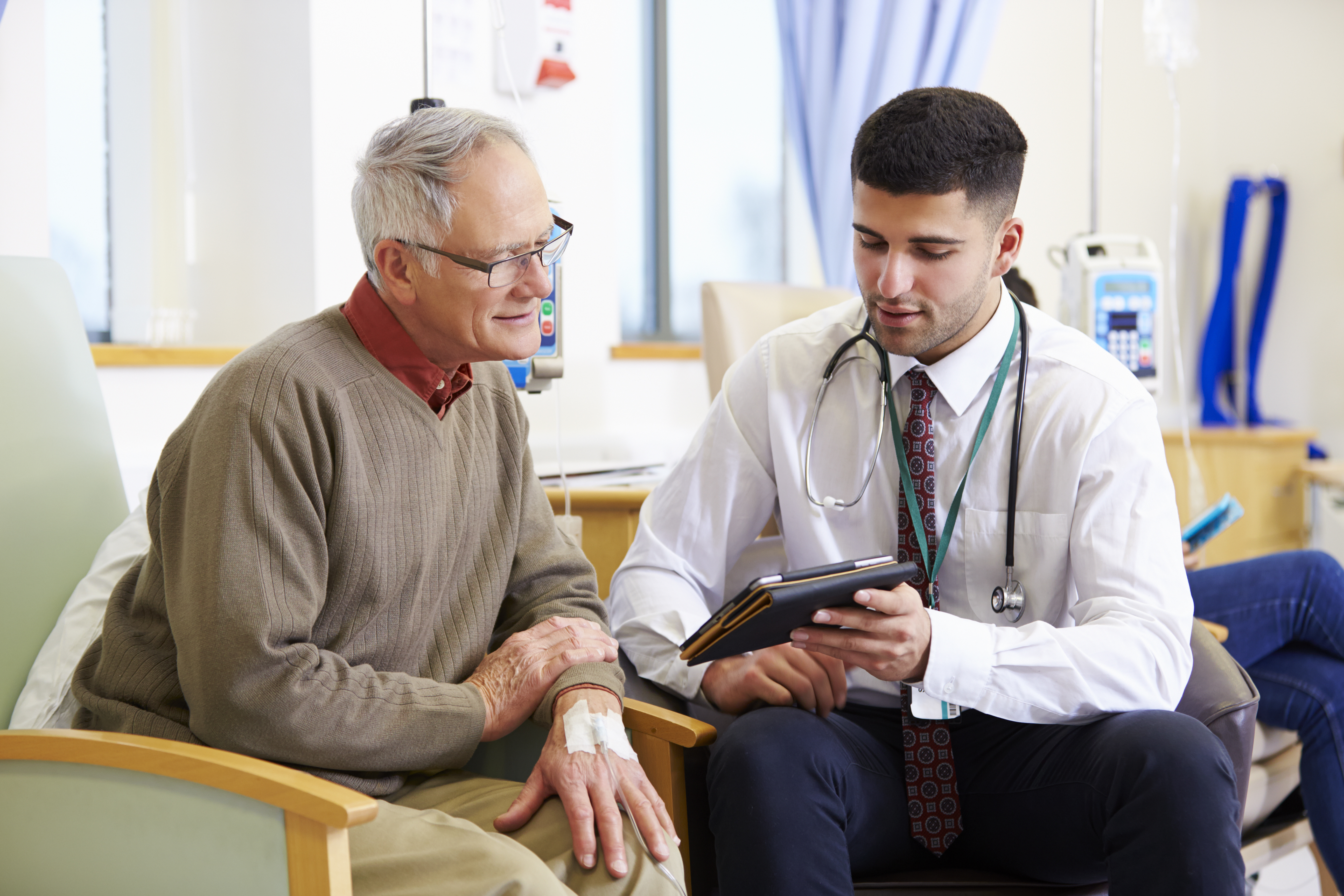 Chemotherapy is the use of drugs to stop tumor growth by destroying cancer cells and/or preventing them from rapidly growing and dividing. Chemotherapy is typically reserved for patients whose cancer has spread beyond the prostate and may be given with hormone therapy or after hormone therapy stops working. While chemotherapy does not cure prostate cancer, it has been shown to reduce symptoms and prolong life for patients with advanced disease, or metastatic castrate-resistant prostate cancer.

Chemotherapy is given as an injection for six, three-week long cycles of treatment. Below is a list of common chemotherapy drugs:

Hormonal therapy can be used before radiation therapy or surgery to shrink the prostate cancer tumor, in conjunction with radiation as an initial treatment or in cases of recurrent disease.  There are two types of hormone therapies.

Bilateral Orchiectomy (surgical castration):
As the majority of testosterone is produced by the testicles, bilateral orchiectomy, or the surgical removal of both testicles, results in much lower testosterone levels in the body.

Androgen Synthesis Inhibitors:
Small amounts of testosterone are produced outside of the testicles. For example, testosterone can be made by the adrenal gland and is sometimes even made by the prostate cancer cells themselves. Androgen synthesis inhibitors can block the production of androgens, like testosterone, from being made throughout the body. These drugs can interfere with the production of other hormones and therefore are often prescribed with a corticosteroid such as prednisone. Below is a list of androgen synthesis inhibitor therapies:

Treatments that block actions of testosterone:

Antiandrogen Therapies:
Androgens work by binding to a protein called an androgen receptor. Antiandrogen therapies block this receptor from functioning, which prevents androgens from promoting the growth and survival of prostate cancer cells. These drugs are typically taken daily as pills and are often taken alongside another form of ADT. Below is a list of antiandrogen therapies: 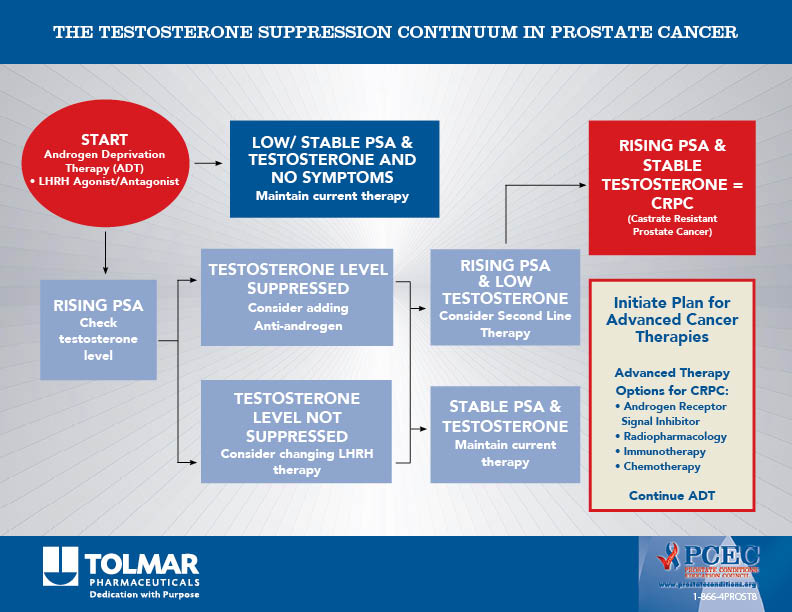 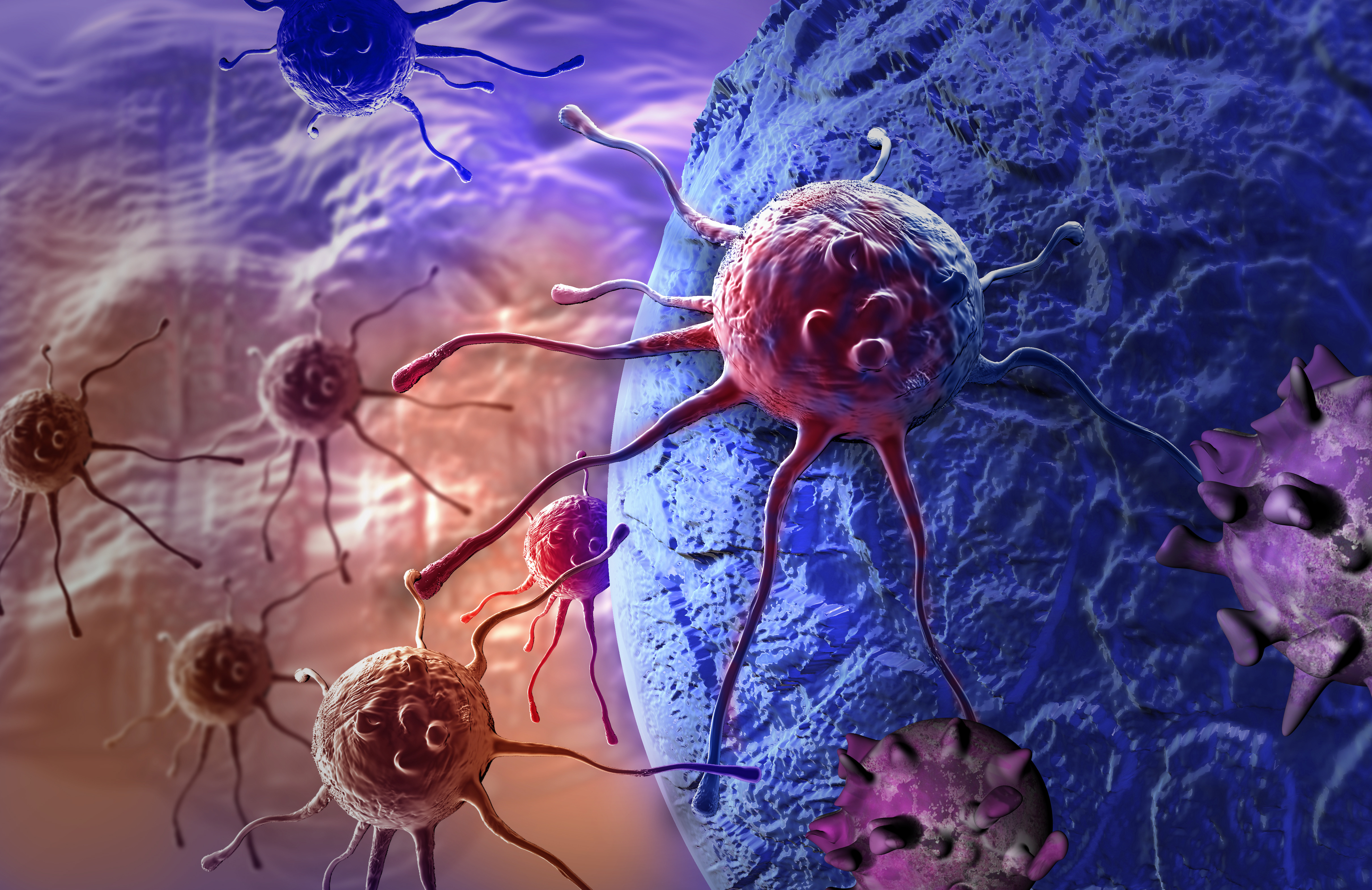 Radiation therapy uses high-energy beams, such as X-rays or protons, to kill cancer cells. These beams damage DNA inside cells, which can result in the death of cancer cells and/or the slowing of cancer growth. While radiation is also toxic to healthy cells, cancer cells are especially vulnerable to DNA damage because of their quick division.  Radiation Therapy is often used as the first treatment for cancer found in the prostate gland. Some forms of radiation are also beneficial for men with advanced disease or recurring prostate cancer.

External Beam Radiation:
EBRT is the most common method of radiation used to treat prostate cancer. Radiation is delivered from outside the body using a large machine that aims radiation at tumor cells. The radiation passes through skin and other tissues to reach the tumor. There are several different types of ERBT, the most common types are discussed below.

3D Conformal Radiation Therapy (3D CRT):
This form of radiation targets tumor cells with X-ray radiation. To minimize the exposure of healthy cells to radiation, MRI, CT, and/or PET images are used to generate a three-dimensional (3D) image of the tumor. A computer program then shapes the radiation beams to match the shape of the tumor so the highest dose of radiation can destroy the cancer cells within the prostate with minimal exposure to the healthy cells nearby.

Intensity Modulated Radiation Therapy (IMRT):
IMRT is a more advanced form of 3D CRT which uses multiple X-ray beams that can be adjusted in their intensity or strength to limit the dose of radiation reaching healthy tissues. IMRT can more precisely and accurately target tumor cells which may result in fewer side effects and higher cure rates.

Volumetric modulated arc therapy (VMAT):
VMAT is a variation of IMRT that delivers radiation quickly as a machine rotates around the body. VMAT reduces treatment duration, however, its effectiveness compared to IMRT has not yet been studied.

Proton Beam Therapy:
Proton beam therapy focuses beams of protons instead of x-rays onto cancer.  In comparison to x-rays, protons cause less damage to tissues they pass through and release their energy only after traveling a certain distance.  This means that proton beam radiation can deliver more radiation to tumors while doing less damage to nearby healthy tissues.  Proton beam radiation can be aimed with techniques similar to 3D CRT and IMRT.  Proton treatment is especially useful for treating localized tumors before they spread beyond the prostate.  Unfortunately, very few medical institutions are equipped to use proton beam therapy in the United States, and the treatment can be expensive.  There are no studies yet showing if proton beam therapy is more effective than x-ray based treatments.

Stereotactic Body Radiotherapy (SBRT):
Before treatment with SBRT, markers are placed around the tumor to faciliate the delivery of large doses of radiation precisely to the tumor.  During treatment, the intensity and direction of the beams are constantly adjusted to target the tumor and spare healthy tissue.  The beams can also be adjusted to accommodate breathing and digestive movements.  SBRT is often used to deliver a course of treatment in a few visits.  There is some research to suggest that side effects may be worse with SBRT compared to IMRT, however further studies are needed.

Brachytherapy or Internal Radiation Therapy:
This treatment uses small radioactive implants, often called "seeds" which are placed in the prostate through a surgical procedure.  Like with EBRT, 3D CRT is used to map the tumor and to calculate the dose and placement of the seeds. There are two approaches to brachytherapy, low-dose rate (LDR) and high-dose rate (HDR). LDR brachytherapy uses placement of seeds, which give off low doses of radiation for weeks or months. Radiation from the seeds travels a very short distance, so the seeds can give off a large amount of radiation in a very small area, which limits the amount of damage to nearby healthy tissues. Because the seeds are so small, they rarely cause discomfort, and are left in place after their radioactive material is used up. Conversely, HDL brachytherapy uses seeds, which give off higher doses of radiation and are only left in place for several minutes. HDL brachytherapy is typically given as several exposures over the course of a few days, after the last treatment, the seeds are removed.

Along with any medical procedure radiation can have side effects.  The following are some common side effects of radiation treatment: 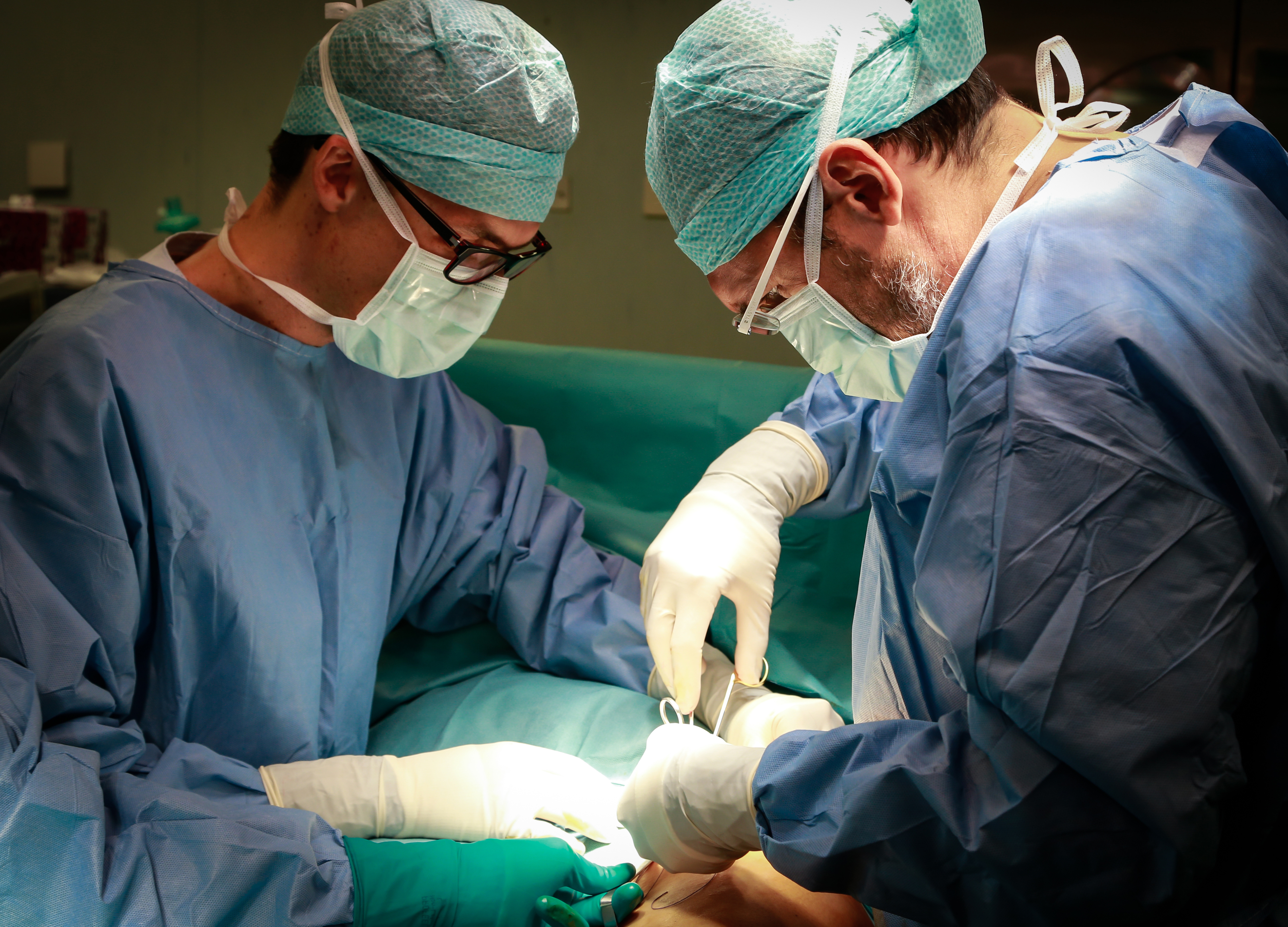 Surgical removal of the prostate for both enlargement (BPH) and cancer can be traced back to the early 19th century.  A major breakthrough in surgical anatomy came in the late 1970's and early 80's when Dr. Patrick Walsh at the Johns Hopkins School of Medicine was able to better delineate the nerves and blood supply to the gland.  The result was a reduction of blood loss during surgery and better preservation of the nerves responsible for sexual function.  The most recent technologic advance came in the early 2000's with the advent of minimally invasive robotically assisted prostatectomy, which remains the most commonly utilized approach if surgery is chosen.  For the most part, radical prostatectomy is a treatment option across all risk groups.  There are essentially 2 major surgical approaches for a radical prostatectomy:

The approach recommended by the urologist takes into account the following variables:

1.    Experience and preference of the surgeon.
2.    Patient anatomy, prostate size and history of prior surgery to the pelvis or abdomen.
3.    Concurrent medical illnesses.
4.    Pre-operative sexual function, activity level and urinary symptoms.

During the immediate post-operative period, the following are common, regardless of the approach:

Major complications may include:

1.    Bleeding require blood transfusion
2.    Urinary incontinence
3.    Risk of blood clots in the legs and lungs
4.    Sexual dysfunction
5.    Incisional pain.
6.    Injury to nearby organs at the time of surgery, especially the rectum.
7.    Narrowing/stricture of the urethra and bladder neck
8.    Lymphocoele (as a result of the lymph node dissection, see below)

By removing the prostate, the pathologist is able to determine the extent of tumor, if it has tried to spread beyond the confines of the gland and tumor upgrading, which are cells with higher grade Gleason that were not identified at biopsy.  In addition, most surgeons will perform a limited lymph node dissection at the time of surgery to better stage the extent of disease which will give insight to what treatment, if any, will need to be undertaken post operatively.  There are times, depending on the pathologic findings at the time of surgery, post-operative radiation therapy may be indicated once the patient recovers from his operation. 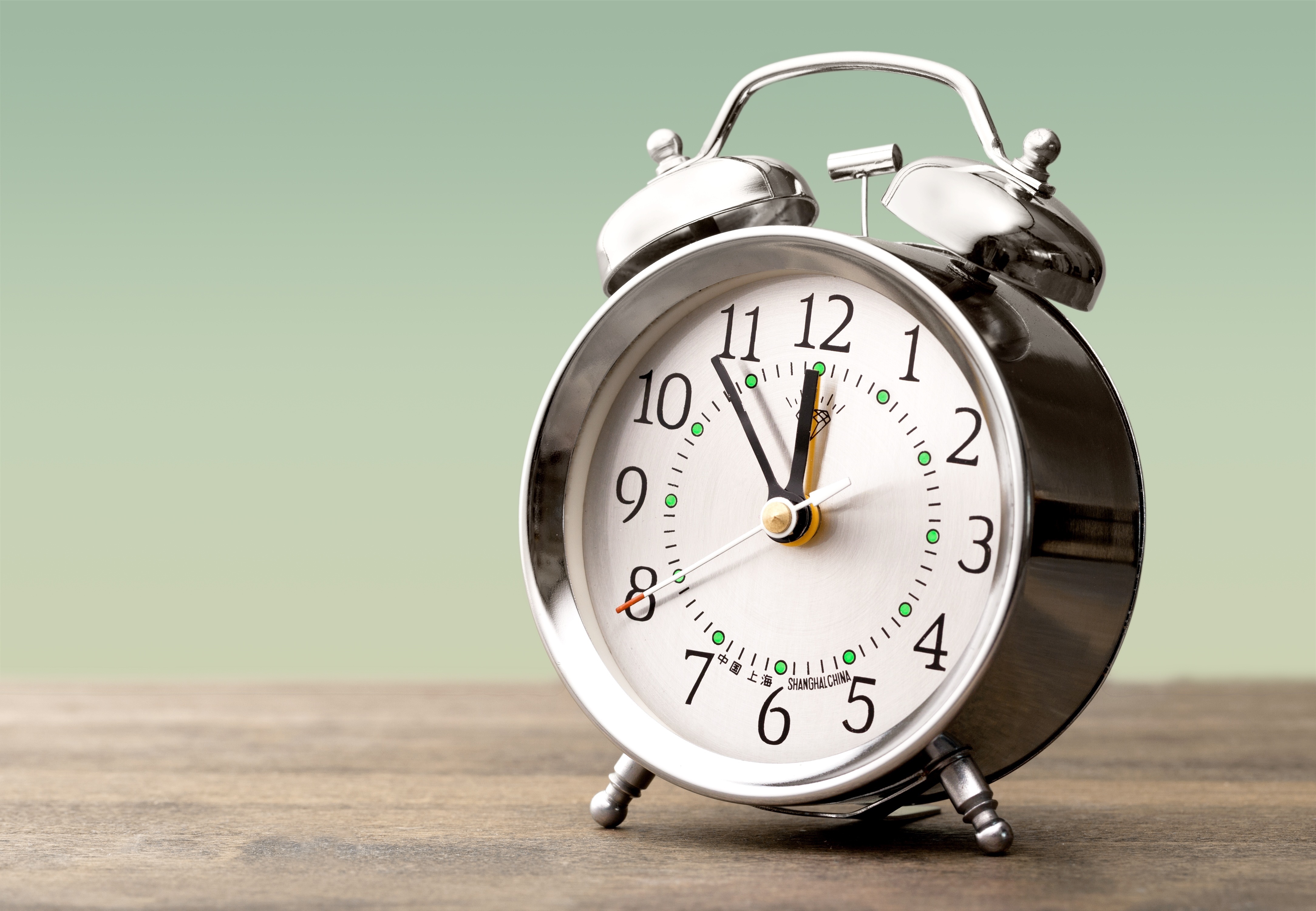 Currently, there is no standardized protocol for active surveillance that has been approved and validated.  Thus, there is variability from practice to practice, provider to provider.  Clearly the benefit of active surveillance is avoiding treatment side effects related to intervention.  However, it must be stressed that it does not necessarily mean that the patient will never need to be treated as the tumor may progress on subsequent biopsy.  It just means that, if the patient chooses, he may not need to be treated today.

There are times when genetic testing, may give us better insight to the true biology and aggressiveness of the tumor that is based on genomics, not on what is viewed under the microscope.  It is important to recognize that the results of either method used will yield an increase or decrease in probability in the likelihood of the presence of more aggressive cancer cells. It should be noted, however, that family history and certain histologic features clearly do warrant testing, based on the currently published guidelines.

The real bottom line: this is not just a man’s disease. It’s a couple’s disease. It takes two to conquer it. But the love can, and will, and life will go on!”