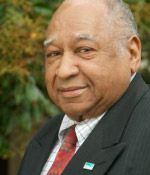 Dr. Staggers was a founding member of PCEC and his leadership will be dearly missed, but his work and legacy in educating physicians and patients will continue on with PCEC.

Dr. Staggers has been a leader and active member in his many professional organizations as well as well as community based organizations both at the local, state and national levels. He has served as president of the National Medical Association (NMA) and also as president of the California State Chapter. The NMA is the nation’s oldest and largest professional, educational, and scientific organization representing the interests of more than 25,000 African American physicians. He has served at Chair of the Advisory Committee on Minority Physicians for the American Medical Association and as Consultant to the Minority Consortium. Dr. Staggers served as Vice Chair, Chair, and President of the California Medical Association (CMA); an organization of more that 34,000 members. He has held many positions in his local county medical society, including the presidency. Dr. Staggers is a co-founder and Chairs the Ethnic Health Institute (EHI); a community service of Alta Bates Summit Medical Center located in Oakland and Berkeley, California. The Ethnic Health Institute’s mission is to promote the health and well being of the community, with a focus on underserved and minority populations.

The real bottom line: this is not just a man’s disease. It’s a couple’s disease. It takes two to conquer it. But the love can, and will, and life will go on!”