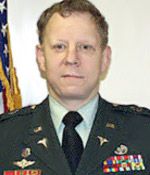 Doctor McLeod was a distinguished Veteran, a leading Urologic Oncologist at Walter Reed Army Medical Center, and the founder of the Center for Prostate Disease Research in addition to being a founding member of PCEC.  His leadership and humor will be missed, but his passion for helping men will live on.

Doctor McLeod is a Colonel in the United States Army Medical Corps. A member of the Medical Department since 1964, Doctor McLeod has received numerous military commendations, including the Legion of Merit award with two Oak Leaf Clusters, Bronze Star, Air Medal, and the Combat Medical Badge for service in Vietnam. Doctor McLeod served as Clearing Platoon Leader and Medical Company Commander of the 1st Brigade 101st Airborne Division while in Vietnam. An alumnus of the University of North Carolina’s undergraduate and medical schools, Doctor McLeod also holds a J.D. from Northern Virginia Law School. He is a member of numerous professional societies, including the American Society of Clinical Urology, the Society of Urologic Oncology, the American Association of Clinical Urologists, and the Society of Surgical Oncology. In addition, Doctor McLeod is the President of the American Foundation of Urologic Disease whose mission is the prevention and cure of urologic disease, through the expansion of patient education, public awareness, research and advocacy, and Immediate Past President of the Mid-Atlantic Section of the American Urologic Association.

Prostate cancer is a disease that is most successfully treated when it is detected early on.  As the research community explores various methods to detecting the disease, PCEC continues to encourage men to play an active role in their health by looking to those trusted sources of prostate cancer testing – the PSA and DRE.